A piano that will encourage enthusiastic players to become accomplished pianists, and transform living rooms into grand concert halls. This is the ambitious philosophy behind Kawai’s latest Concert Artist series – premium instruments that capture the essence of playing a magnificent concert grand piano, and inspire musicians of all ages and abilities to realise their true artistic potential. 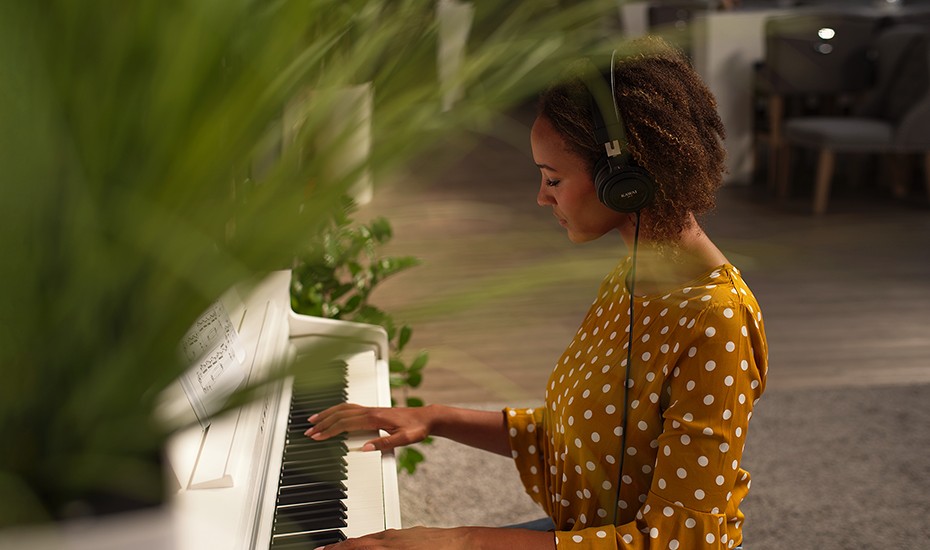 With an emphasis on piano-focussed authenticity, the CA49 utilises the superb Grand Feel Compact wooden-key keyboard action. As its name suggest, the GF Compact action has been designed to reproduce the authentic touch weight characteristics of the industry-leading Grand Feel keyboard actions, within a smaller form factor. 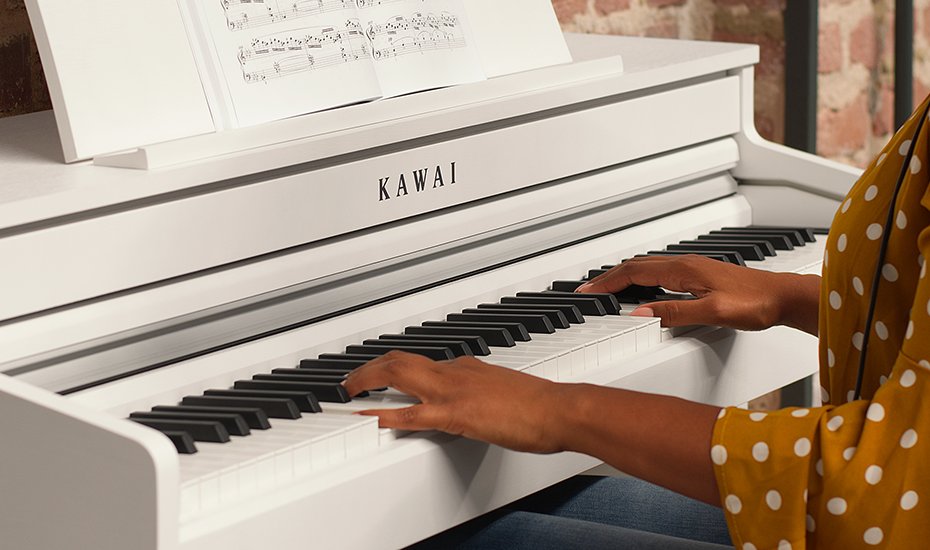 This action retains the long wooden keysticks used for all 88 black and white keys, and the familiar ‘seesaw’ mechanism employed by acoustic grand piano actions for centuries. However, despite its smaller unit size, GF Compact features an extended key pivot length, providing a more consistent touch weight when playing towards the rear of the keyboard. This crucial detail, along with various other acoustic piano-like characteristics, ensures the CA49 delivers the most realistic playing experience in its class.

In addition to grade-weighted hammers, the Grand Feel Compact keyboard action also features counterweights attached towards the front of the bass keys.

As with an acoustic piano, these finely balanced weights help to lighten the touch of the keyboard during pianissimo passages, while adding a feel of greater substance when playing with force. 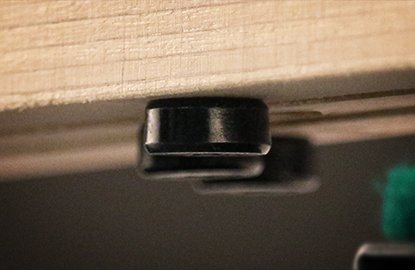 The added third sensor improves responsiveness when playing the same key repeatedly, and unlike conventional two sensor keyboard actions found in many digital pianos, allows the sound of a single note to be gradually ‘layered’ without the previous tone being lost.

In addition, Kawai’s action technology also monitors the speed at which each key is lifted, influencing the release character of piano sounds, and providing a greater range of expression between staccato and legato playing. 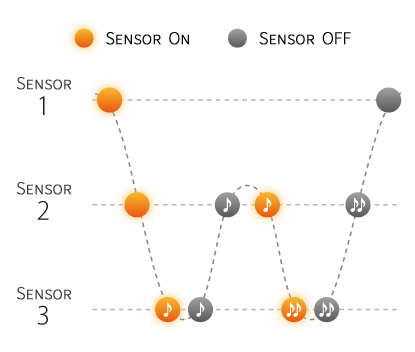 Furthermore, this moisture is absorbed without dirt or grease permeating the surface, allowing the keytops to be wiped clean easily using just a damp cloth. 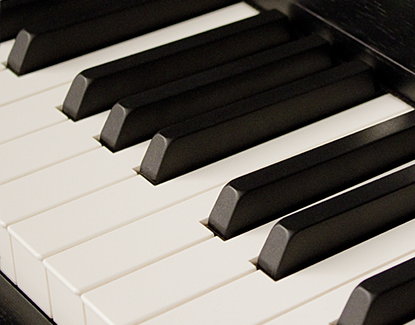 As the most authentic digital piano keyboard action in its class, Grand Feel Compact even reproduces the ‘let-off’ characteristic of acoustic piano actions.

This subtle ‘notch’ sensation can be felt when playing the keys of a grand piano very gently, and may be used by experienced pianists to aid control when playing pianissimo passages. 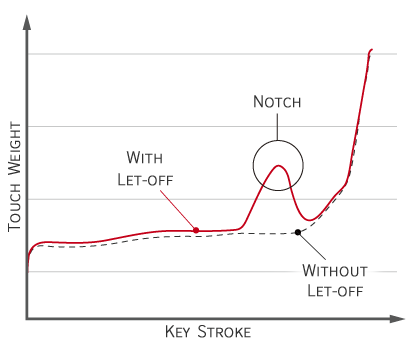 The Sound Of A Grand Piano: Two World-Class Instruments

Earning a reputation as the ‘premier pianos of Japan’, Shigeru Kawai instruments grace the stages of concert halls and musical institutions throughout the world, and are prized for their outstanding tonal clarity and exceptional dynamic range.

The CA49 captures the magnificent tone of the flagship Shigeru Kawai SK-EX concert grand piano. This peerless instrument is hand-built by Master Piano Artisans at the Shigeru Kawai Piano Research Laboratory in Ryuyo, Japan, and widely regarded as one of the finest instruments in its class.

In addition, the CA49 also features the distinctive sound of Kawai’s highly acclaimed EX concert grand piano, which has been selected by professional pianists in such prestigious events as the Chopin, Tchaikovsky, and Rubinstein international piano competitions, among others.

Both the SK-EX and EX are faithfully reproduced with full 88-key sampling using advanced Harmonic Imaging™ sound technology, to establish a new standard in digital piano tonal quality, and allow musicians to appreciate the contrasting properties of each. 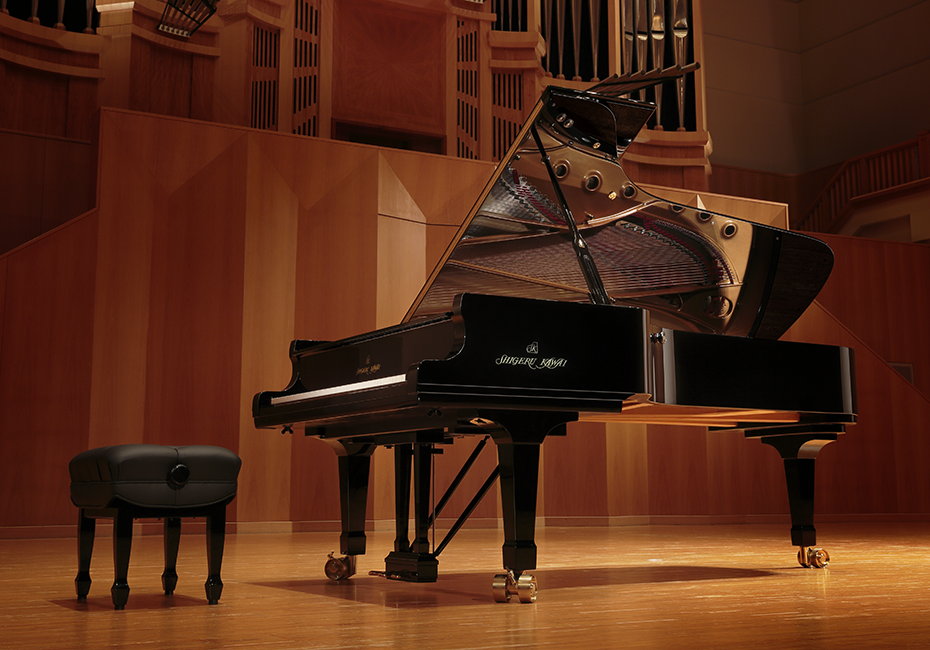 The rich, expressive sound of the SK-EX and EX concert grand pianos is at the heart of the CA49, with all eighty-eight keys of these world-class instruments painstakingly recorded, meticulously analysed, and accurately reproduced as high-fidelity digital waveforms.

Recording each key individually in this way – as opposed to stretching the same tone over several different notes – preserves the grand pianos’ unique harmonic character, and guarantees that the sound heard when playing any one of the CA49’s wooden keys is a faithful representation of the original acoustic source. 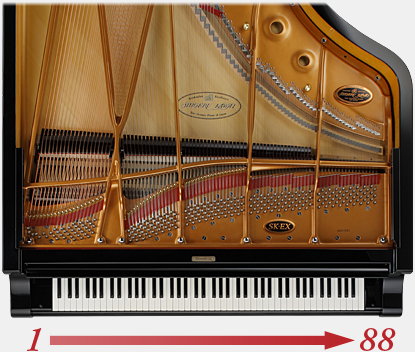 When playing a fine piano, the amount of pressure applied to the keyboard affects not only the volume of the sound produced, but also the unique tonal character of each note. Therefore, in order to construct a realistic acoustic portrait of each grand piano, not only is each key recorded individually, but also at a wide variety of different volumes, ranging from gentle pianissimo to thunderous fortissimo. 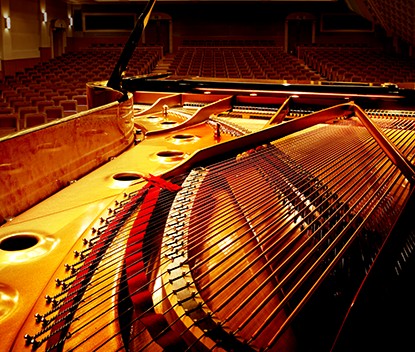 The knowledge and skill of an experienced piano technician is essential to bring out the best of a fine acoustic piano. In addition to tuning each note, the technician also performs numerous regulation and voicing adjustments that allow the instrument to truly sing. 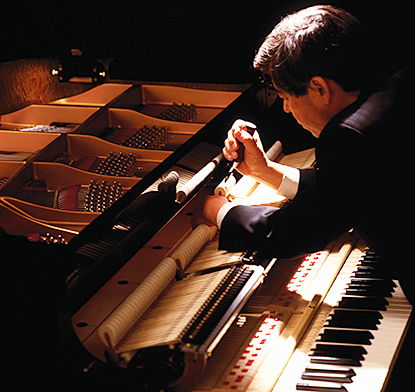 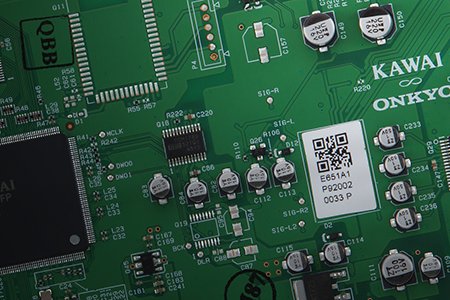 The CA49 boasts an impressive 4-speaker output system, with lower range frequencies delivered through the underside of the instrument, and mid and high frequencies projected outward via front-facing speakers. The result is a broad, resonating tone that closely mirrors the immersive sound field of a grand piano. 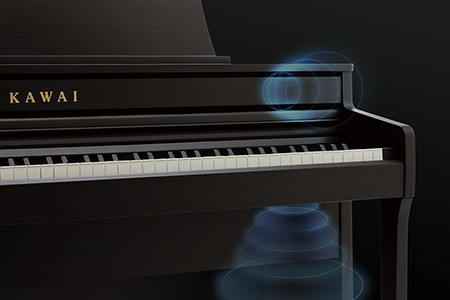 The Variety Of A Digital Piano: Convenience & Flexibility

A selection of different instrument voices, built-in lesson songs, and the ability to record and playback performances are just some of the features accessible from the cheek-block control panel, with built-in Bluetooth® functionality for connecting to smart devices wirelessly. 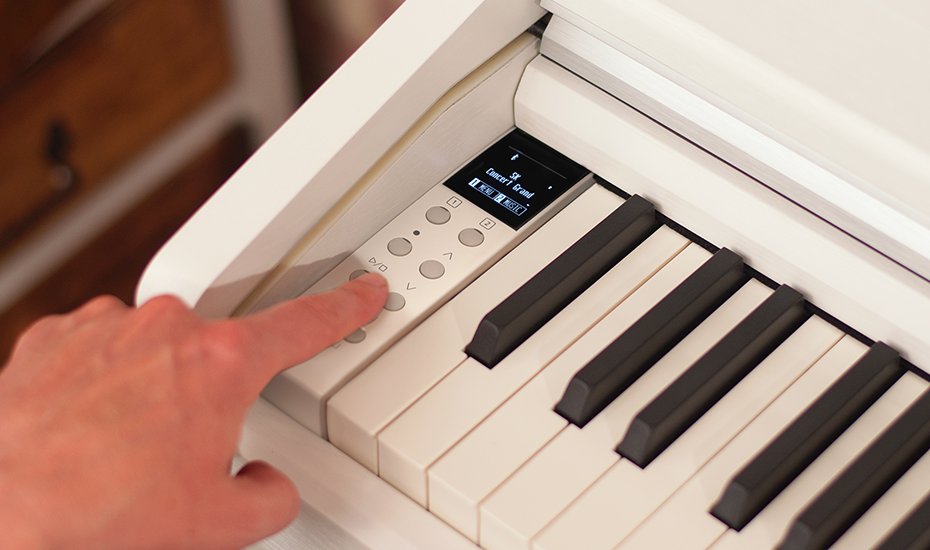 Furthermore, the Dual playing mode also allows two different sounds, such as grand piano and strings, to be layered together, while the Four Hands mode divides the keyboard into two independent 44-key sections. This feature is particularly useful in learning environments, allowing teacher and student (or student and student) to play together at the same time using a single instrument. 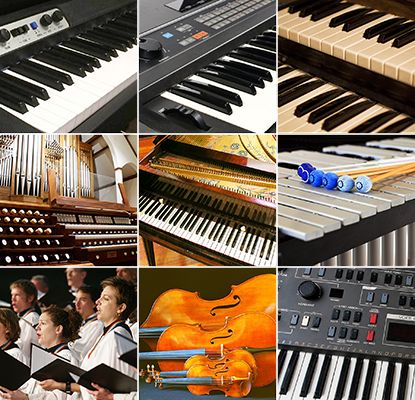 The left and right hand parts of each etude/song can be practiced separately, using the adjustable metronome feature to perfect timing in difficult passages, before recording the completed piece for self-evaluation. 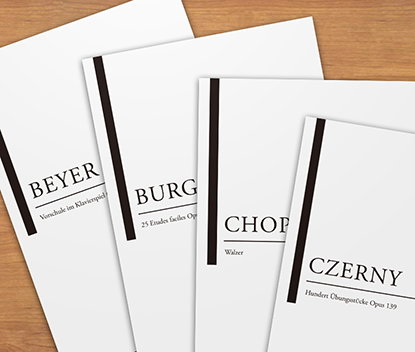 Once paired with a phone or tablet, CA49 owners can easily control the instrument or display notated scores for built-in lesson songs using the dedicated PianoRemote and PiaBookPlayer apps. Moreover, the instrument’s functionality can also be expanded using a broad range of 3rd party education, performance, and scoring apps. 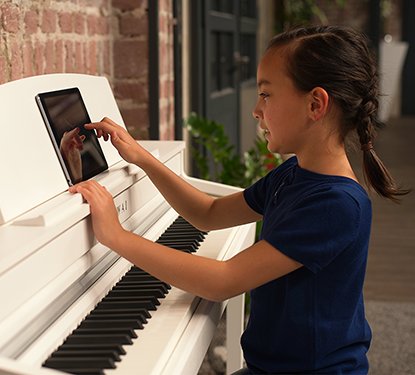 The latest CA49 is compatible with Kawai’s new PianoRemote control app for iOS and supported Android devices. This app connects to the piano wirelessly via the Concert Artists’ integrated Bluetooth feature, providing an effortless way to change sounds, adjust settings, or enjoy the vast array of built-in music content from the comfort of an armchair. 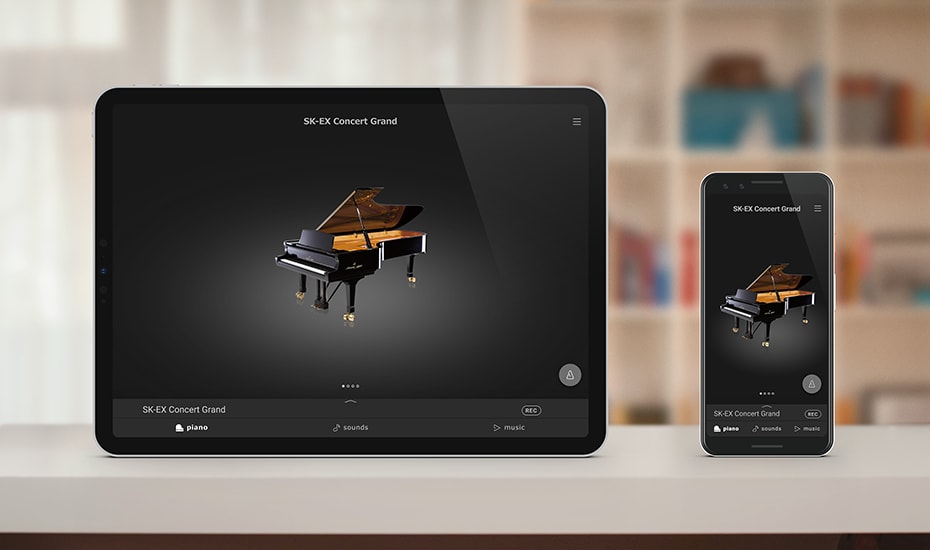 The CA49’s Spatial Headphone Sound (SHS) technology enhances the depth and realism of the instrument’s sound when listening through headphones or earphones. The player can select one of three different acoustic presets that adjust the spatial positioning of the sound, while also helping to reduce auditory fatigue when using earphones or headphones for extended periods of time. 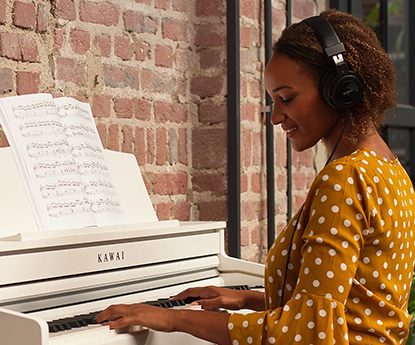 Reinforcing the CA Series’ reputation as the most realistic digital pianos in their price range is Kawai’s Grand Feel Pedal System. This unique feature accurately replicates the position and individual weighting of the damper, soft, and sostenuto pedals of a Shigeru Kawai SK-EX concert grand piano to further enhance the CA49’s acoustic piano-like authenticity.

The CA49’s modern cabinet incorporates a rounded topboard and tapered leg design, with minimalist toe blocks for additional stability. Its flat fascia and tall upper board give the instrument a traditional, upright piano-like quality, while at just over 46 centimetres deep, the CA49’s compact body is suitable for apartments and other narrow spaces. 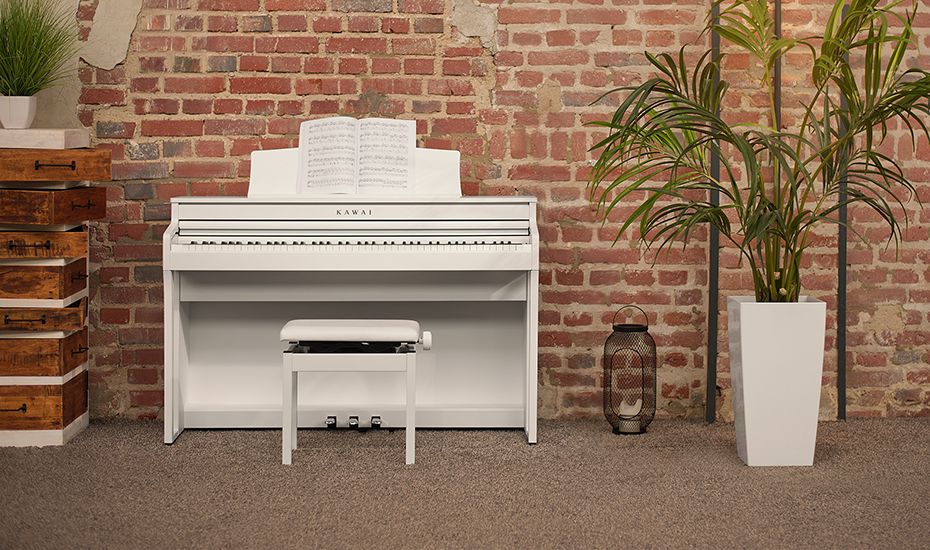 The CA49’s broad music rest is engineered to accommodate the most ambitious musical works, with a high-quality surface and attractive round design.

As with a grand piano, the viewing angle of the instrument’s music rest can be adjusted to suit the performer’s playing position, or laid flat for convenience when notating scores or sketching musical ideas. 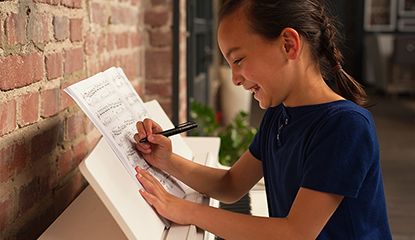 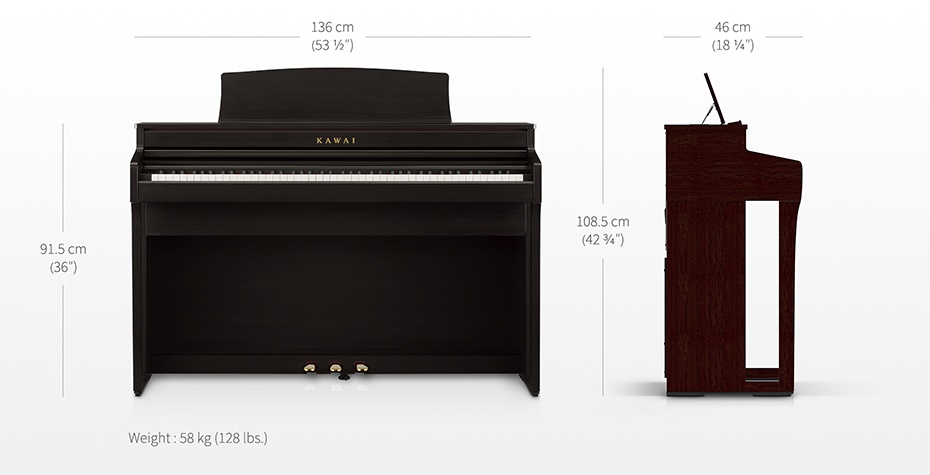